Skip to Main Content
It looks like you're using Internet Explorer 11 or older. This website works best with modern browsers such as the latest versions of Chrome, Firefox, Safari, and Edge. If you continue with this browser, you may see unexpected results.

In addition to the overview provided in each box below, you can use the arrow buttons to view collection items that were part of the exhibit.  If you click on the image or caption title, the image will be enlarged in a new tab with the option to zoom in further.

One of the treasures of the Quayle Bible Collection is a 16th century tapestry relating the early life of David. This tapestry is the beginning point of the exhibit, but to understand the story of David, as it is told in the First Book of Samuel, it is handy to have some context.

According to the Bible, the twelve tribes of Israel did not live in harmony with one another. They fought each other as well as the non-Israelite tribes in the land of Canaan. God was sovereign over all the tribes, but the leaders on the ground, so to speak, included prophets, judges and priests.

The Israelites were not happy with this arrangement and asked to have a King, like other nations. The prophet Samuel chose Saul to be their king. Saul disobeyed God and failed as a king, so God asked Samuel to choose another king. This time, God left nothing to chance and led Samuel to David, a most unlikely candidate. He was a shepherd, the youngest son of Jesse, of whom little is known other than that he was from Bethlehem. 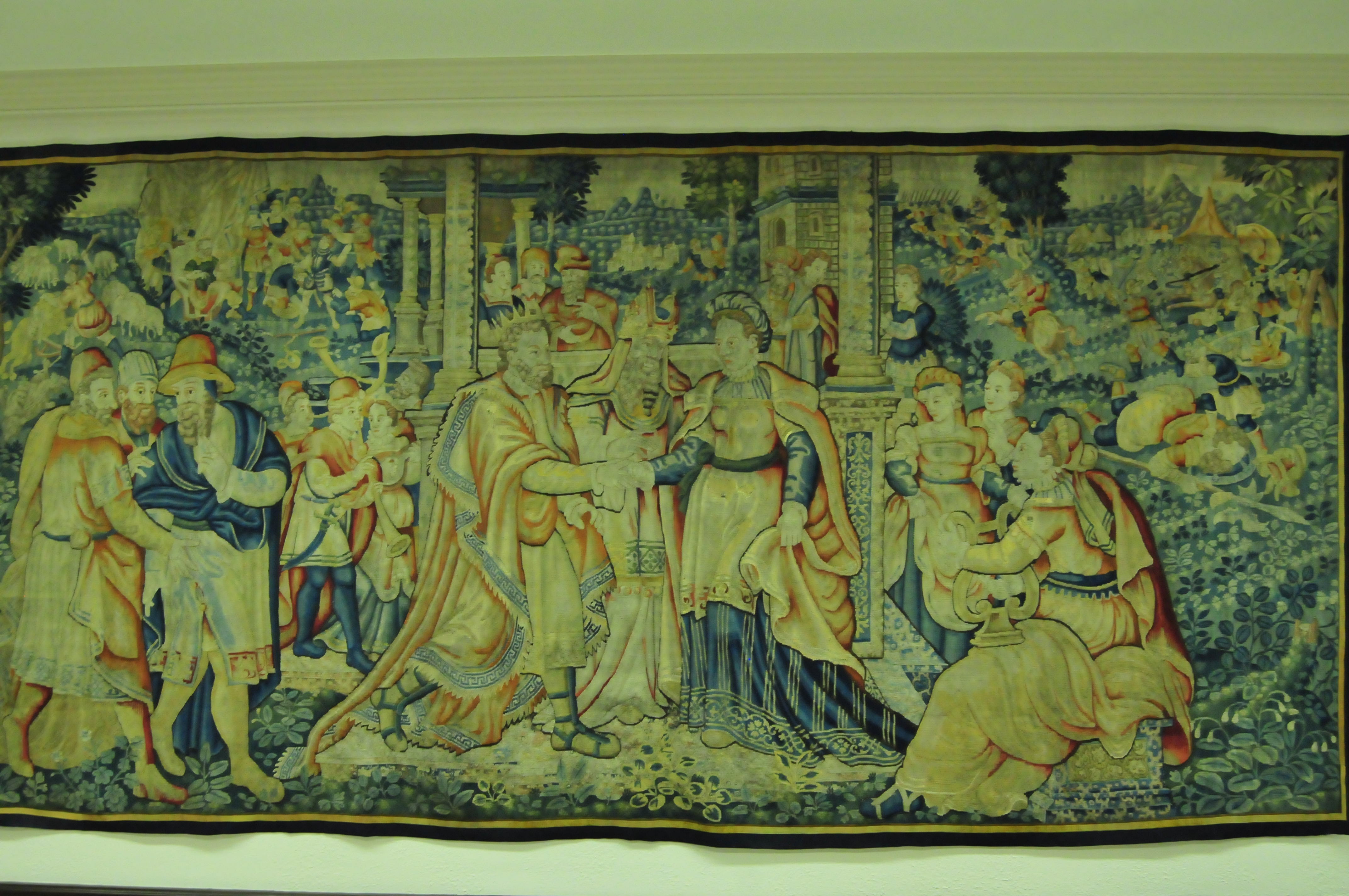 The Flemish tapestry, dating probably from the mid-16th century, provided the impetus for this exhibit and shows several scenes from David’s early life.

As a teenager, David was the shepherd of his father Jesse’s flock. On the right we have a depiction of David fighting a lion and a bear.  This story does not appear in the narrative of 1 Samuel, only in David’s boasting about his accomplishments and his ability to slay the giant Goliath. 1 Samuel 17:36 states, “Thy servant slew both the lion and the bear: and this uncircumcised Philistine shall be as one of them.”

On the left, David is anointed by Samuel, making him God’s chosen one, to be King of Israel.  The anointed one in Hebrew is messiah (מָשִיחַ).  Based on this theology, all the kings of Israel must rule with the blessing of God, much like the divine right of kings in Europe.  As a result, the lineage of the Messiah is thought by the Jews to travel through David’s bloodline making the messiah both king and shepherd.  Christians trace Jesus’s genealogy back to David to justify his legitimacy as messiah. 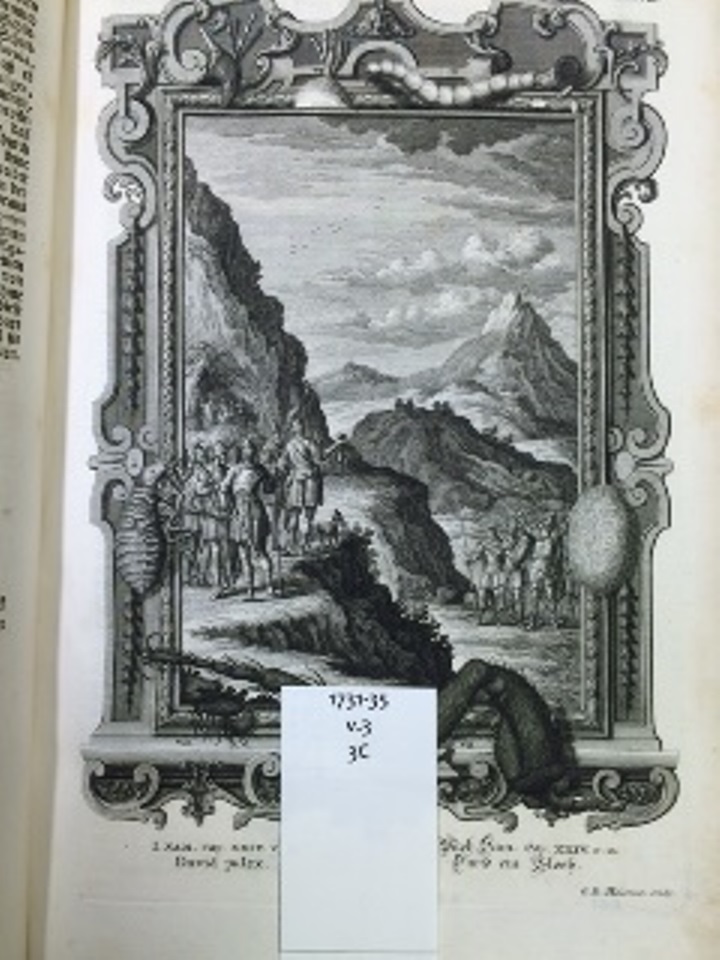 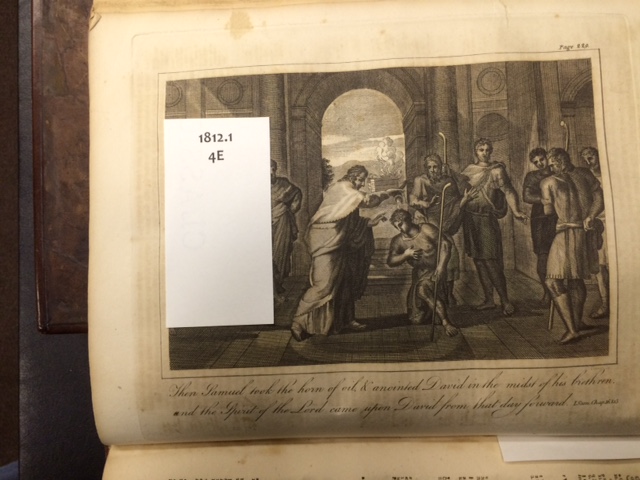 Some traditions hold that David was between 12-15 years old when he donned Saul’s armor and marched to the Valley of Elah to face Goliath.  He is almost always depicted as a young boy with a sling, the most famous portrayal is probably Michelangelo’s David.  Although he had just received the armor of Saul, he is usually pictured without armor in order to emphasize the shear stature of Goliath and the minuscule profile of David.  The only exception of this occurs when David is cutting the head off of the Philistine.  The cultural impact of this story resonates with every “underdog” narrative that is told, even if David was more appropriately equipped and a canny fighter.

On the left, Goliath and a fellow Philistine solider are clothed in Roman military garb; the young David hardly looks prepared except for his sling

On the right, the beheading of the giant is off center of the engraving; however, it is the center of the battle scene, surrounded by horses and soldiers.  Although wielding a sword, David is still depicted armor-less. 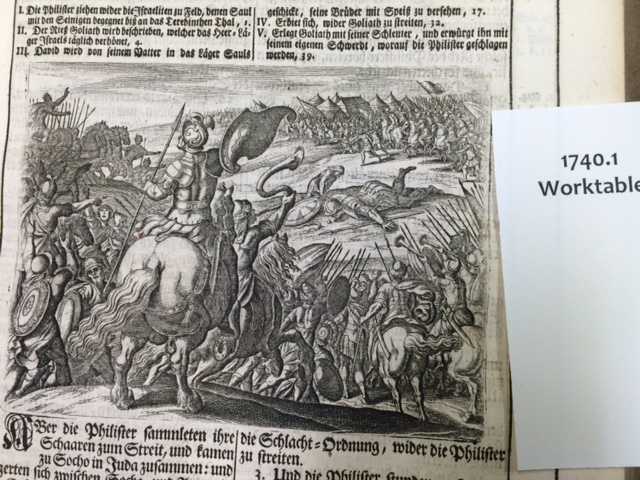 One of Saul’s sons, Jonathan, had an especially close relationship with David that has been at the center of controversy for scholars and theologians.  The story of David and Jonathan is set as a parallel with the relationship between David and Saul’s daughter, Michal. The siblings both loved David and both sided with David against their father. However, it would appear that David loved her brother Jonathan more.

When David gained popularity with the people, King Saul became furious and attempted to kill him.  Because of their love, Jonathan made a covenant with David and vowed to save him.  On the right, Saul is told that David is missing while David and Jonathan make a covenant in the wilderness.  In the Middle, David and Jonathan embrace and cry after Saul has ordered David’s death, for Jonathan “loved him as he loved his own soul.” (1 Sam. 20:17) Jonathan promised that if his father’s hate had abated and David could return, Jonathan would shoot arrows for a boy to fetch; however, if Saul meant to kill David still, Jonathan would fire an arrow far above the boy’s head.  On the left, Jonathan fires an arrow above the boy’s head, while David looks from a nearby cave.

Beneath the tapestry: David and Michal

When David refused to marry Saul’s older daughter Merab, Saul gave his daughter Michal to David in marriage.  According to 1 Samuel 18:20, Michal loved David, which pleased her father.  Although David does not appear to have loved Michal like he loved her brother Jonathan, she still cared for him.

Much as Jonathan helped David escape Saul’s wrath, Michal puts a dummy in David’s bed to throw off Saul’s soldiers who come looking to kill him and then she lowers him out the window.  The left depicts the guards storming the room with the mannequin barely visible in the bed, while Michal lowers David down.  On the right, there is a similar depiction of the same scene but in color. 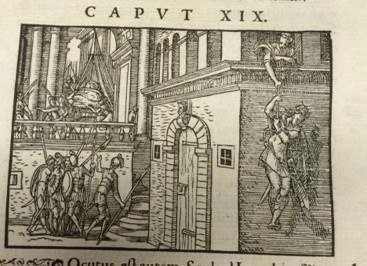 Death of Saul and Jonathan

Saul essentially failed as the first king of all Israel; however, his death should not be seen as the sign of his failure. His death was but the culmination of events that began with Saul disappointing the Lord.  The theological narrative makes Saul a negative character which ends in his suicide in order to pave the way for David.  Saul falls on his sword only after the Philistines had overtaken his army, killed his sons, and shot him with arrows.  Suicide was the only way to keep from being taken prisoner and tortured by the Philistines.

On the right, we progress through the story in four scenes: Saul dies having fallen on his sword, his head is taken by the Philistines to their temple, his crown is brought to David, and David morns his death and that of his dear friend, Jonathan.  On the left is the text of David’s lament on the deaths of Saul and Jonathan, from 2 Samuel 1: 17-27. 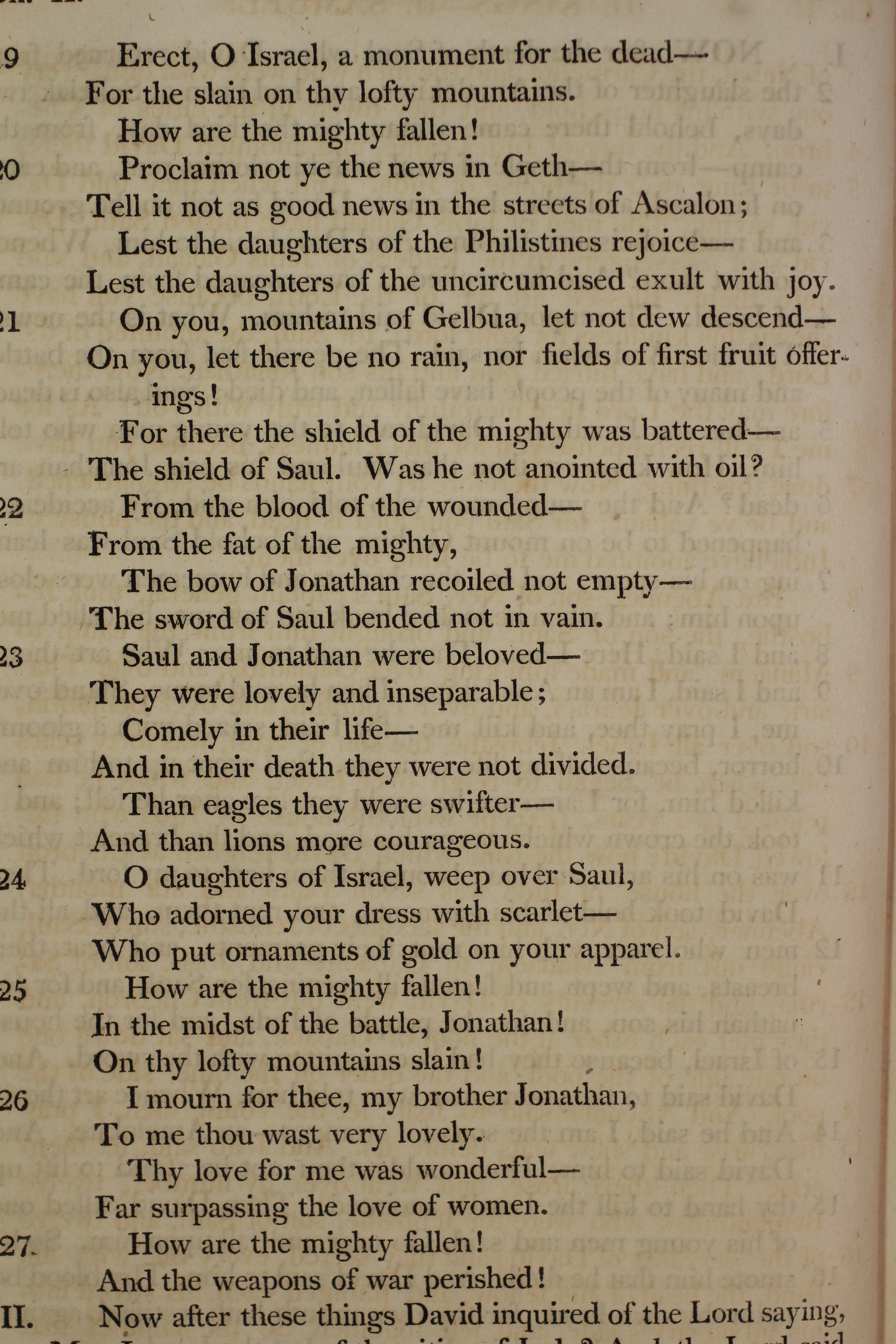 Probably the most infamous story of David’s reign is that of his seduction of Bathsheba. The story is typically titled David’s sin or David’s crime.  Looking out of the window in his palace, David catches sight of Bathsheba bathing and decides he must have her.  Lovely Bathsheba bathing has always been a popular image in art.  Some scholars argue that this scene is meant to show the sin and guilt, not only of Bathsheba and David but also the reader, arguing that the inclusion of this scene encouraged a sort of guilty voyeurism.  As a result of this focus on Bathsheba’s nudity, readers often shift the blame from David’s lust to Bathsheba’s exhibitionism.

Because cultural norms about sexuality have changed over time, Bathsheba is portrayed differently, from fully nude (on the left) to only bathing her feet (on the right).  In both, David is seen in the upper left watching the bathing.  One even shows him playing his harp as if to woo her with music. 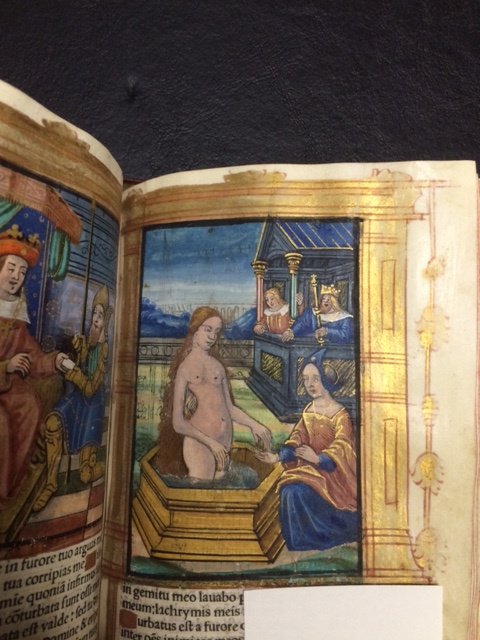 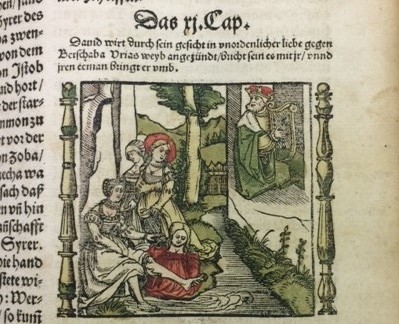 Bathsheba becomes pregnant by David, so David plots several times to get rid of her husband, Uriah, so that he can marry her. At last David sends him to the front lines of battle where he is likely to be killed. Bathsheba is not in a position to refuse David and becomes one of his wives.  For this, the Lord punishes David by killing his first born son from his union with Bathsheba.

On the left, David hands his commander, Joab, the letter condemning Uriah to death by placing him on the front lines.  To the right, the prophet Nathan, sent by God, upbraids David condemning his actions. 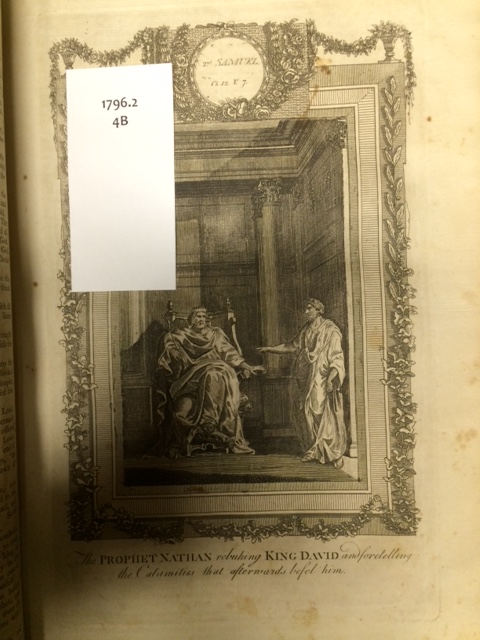 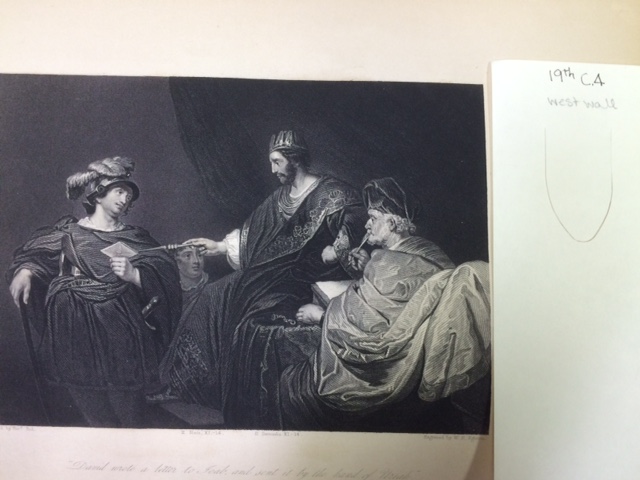 Historic Illustrations of the Bible. London : Fisher, Son and Co., no date.

David’s family was not unlike any royal family, with sparring, rivalry and intrigue. He had difficult relationships with his children, especially his oldest son Absalom.  Absalom was a favorite, handsome, and known for his beautiful hair.  However, when Absalom’s brother Amnon raped their sister Tamar, Absalom committed fratricide and was exiled by his father.

Eventually, he was welcomed back to Jerusalem by David. But he grew restless and sought to rule in his father’s place, causing civil war.  When the people favored Absalom, it was David who fled Jerusalem with his supporters, only to return after Absalom’s death.  Death came to Absalom when, riding a mule in battle, he was caught in a tree by his long, beautiful hair.  Although David had commanded that no one hurt him, David’s commander Joab killed him, as seen on the left. On the right, David mourns the death of his rebellious son. 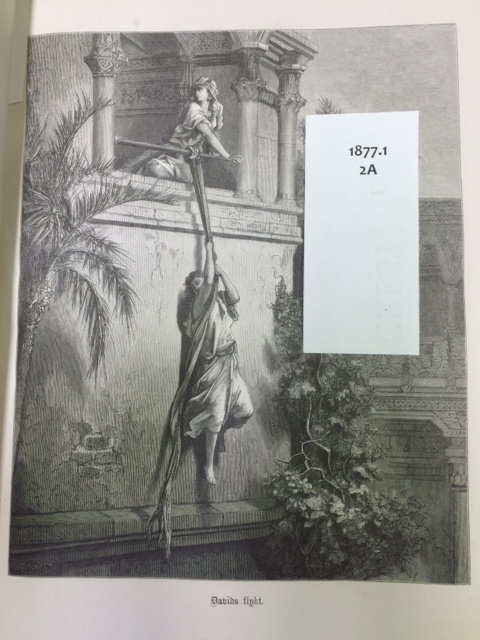 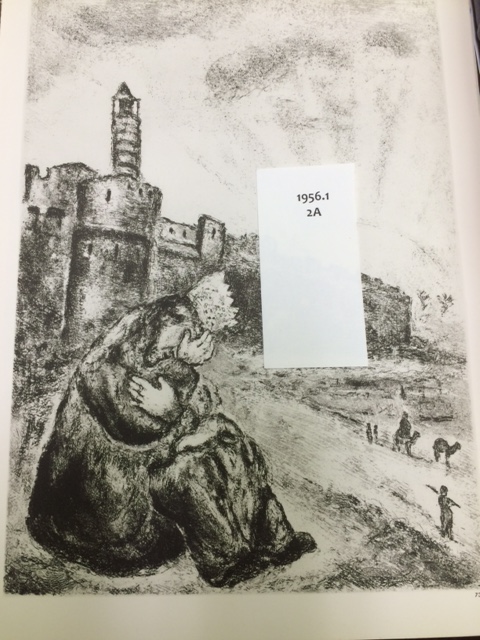 Death of David & Succession of Solomon

As David neared the end of his life, it seemed obvious that his oldest living son, Adonijah, should succeed him.  Adonijah even preemptively proclaimed himself king; however, the prophet Nathan conspired with Bathsheba to convince David to make Solomon his heir.

Before he died, David imparted his knowledge to Solomon and then David “slept with his fathers.”  Solomon would come to be known as the second greatest king of Israel, builder of the temple, poet, lover, and wise sage.  On the left, we see Bathsheba pleading with David to choose Solomon as his successor.  On the right, David is seen giving Solomon instruction with the temple plans in his left hand. 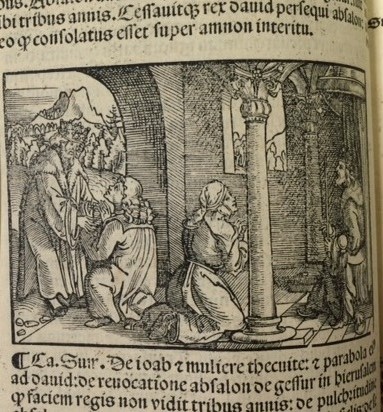 The Psalms and Psalm Genres

The Psalms are associated with David, and many of the superscriptions (like the one above Psalm 7) refer to him or to events in his life. Although many psalters are titled The Psalms of David, there is no clear evidence that he authored many or even any of them.

The Psalms were used in both public and private worship. They were printed in breviaries (liturgical texts), books of hours (prayers and passages for the use of laypeople) and books used by priests as they visited the sick and gave comfort.

Reformers like Luther and Calvin were keen on congregational singing as a way to teach the psalms. In addition, Calvin wrote that the emotional connection forged by singing the psalms was much stronger than merely reading or hearing them.

Looking at the contents of these psalms adapted for singing, it is also possible to see a number of different types of psalm.

Faithful translations of the psalms rarely turned out to be sing-able and many writers and composers turned their attention to putting the psalms into poetic meter and providing tunes and harmonies. The tunes of Clement Marot, Louis Bourgeois, Isaac Watts and Charles Wesley survive today in most hymnals.

Isaac Watts and Charles Wesley both adapted the Psalms for use in Christian worship by inserting references to Christ and salvation.